Brian T as Ardoare the Tiefling Sorcerer.
Drew as Beliel the Drow Warlock
Jacob as Kintama the Theif
Scott as Eldritch
Cooper as Eselda the Cleric
Ace as Quinaro the Elf Ranger
Jeff as Rhyn the Human Avenger
Tim as DM

Leaving the training room behind them, the adventures step into the entry hall, only two find two aspects of it altered. The first and less pressing is that the hatch in the northeast wall stands open, revealing a spiral staircase that drops away into darkness. Second, the amorphous shadow creature with eyes of crimson flame stands before you, pointing a long, accusing finger in your direction. 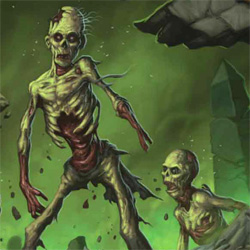 In response to his silent call, wraiths boil up from the shadows and several zombies limp down the stairs. Ardoare, staring at the zombies, realizes that the zombies are the animated remains of the dead adventures they encountered at the entrance to the hidden chambers. Had they disposed of the bodies or given some sort of religious relief to those souls, they might not now be fighting them.

The adventures battle with much radiant damage, destroying all the monsters without taking much damage themselves. The black specter darts to and fro, trying to kill the adventurers, but they are too powerful. As the specter and his minions fade away, destroyed, they hear a deep rumble as of the wards around the hidden chamber giving way.

As the dust settles, they see the female spirit from the bedchamber standing amongst the battlefield, like a specter of death herself. She surveys the devastation they wreaked, then – as they watch – her soft, gentle blue gives way to a deeper purple before erupting with the bright red of blood. She makes a sound for the first time – a terrible haunting cackle that shakes them to the bone.

Then – casting them a look that is both grateful and not a little bit hungry – she fades away into the air like dispersing mist.

Peace has returned and the adventures can take an extended rest since they have now defeated the black specter that was haunting their dreams. As they bed down, their thoughts go back to the female spirit that escaped when the wards came down. What was she? What have they unwittingly unleashed upon Faerun?

(Players take an Extended Rest and Level up to 2.)