The Fall of Witch and Tower

Episode Final: The Fall of the Ice Witch

Cooper as Telhami the Human Ranger
Ace as Thorn the Razorclaw Monk
Drew as Sythril the Warlock Shade.
Pat as Mika the Human Gunslinger, um Wandslinger
Helen as Heskan the Dragonborn Paladin
Niall as Berley Morgannan the Human Warlord
Tim as DM

As the skeletal dragon and the Ice Witch simulacrum falls, the other heroes from Icewind Dale arrive. There is some debate as which team is better. Both teams enter the Ice Tower and the Icewind Dale team the first level and fights Akar Kessell and King Gunvald of the barbarians. The Undermountain team continues up to the top off the Ice Tower to confront Hedrun the Ice Witch.

No parley is possible, she screams at them as they enter her sanctum and calls to her Goddess for protection. Two statues in the room come to life and the adventures have a fight on their hands. 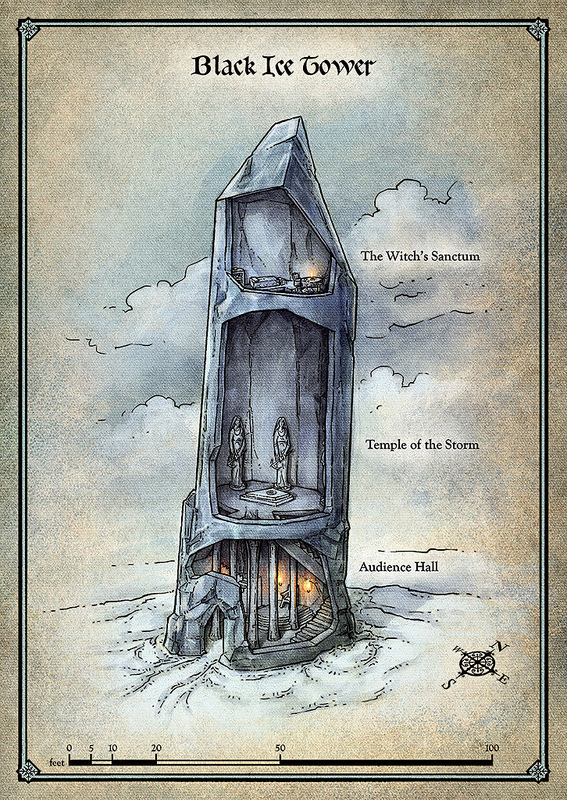 Hedrun is a deadly opponent, even when dazed. She has a standard action that give her two attacks of her choice, and her attacks often can target one or two targets. And she has two action points.

Thorn takes down one Ice Statue and Mika takes down the other, but the Ice Witch isn’t abandoned by her Godess. Two more statues come to life to join the battle.

The heroes continue to damage the Ice Witch and she seems to get more powerful as she takes more damage. After a harsh wound she screams and an aura of ice and hail surround her. Sythril and Telhami destroy the two remaining Ice Statues and the heroes close in around Hedrun.

Berley is push down the hole in the center of the room and falls into the middle of the battle below. He quickly picks himself up and rushes back up the stairs to get back into the fight. Telhami also goes down the hole, risking the fall damage then taking the damage from the Ice Witch’s aura.

Sythril delivers the fatal blow as the heroes from below come running up to help. The Ice Witch screams and dies, but the Ice Tower now begins to shake and rattle. Everyone rushes out as the Ice Tower tumbles into the ground.

The heroes have saved Icewind Dale. But as the look over the pile of ice and snow, they begin to wonder how they’ll get back home.