Cooper as Telhami the Human Ranger
Ace as Thorn the Razorclaw Shifter Monk
Drew as Ulvein the Drow Warlock
Jeff as Maeliet the Eladrin Blade Singer
Lance as Whyrun the Dragonborn Bard.
Collin as Mika the Human Gunslinger, um Wandslinger.
Tim as DM

Through the door, which hangs slightly ajar, the adventurers see a dim room lit by weird blues, greens, and pinks. They see Xeres fleeing away through a door opposite the entrance, a struggling Fayne slung across his shoulder. As they approach, he ducks into a darkened back room.

The aroma of rot mingled with sulfur, searing flesh, and other smells they can’t recognize assails their nostrils, prompting coughs. The room is lit by dim blue-burning candles, as well as the bright glowing contents of beakers, vials, and all sort of alchemical implements on the central table. The rest of the laboratory is choked with fungus and moss.

Someone recognizes the smells and thinks about walking mushrooms. Someone recognizes the equipment and set up as being some sort of alchemical laboratory, full of explosive elements. Someone else recalls that myconid often share spaces with slimes, molds, or puddings. (DM notes: I inserted a skill check type thing to add some RPG and atmosphere to the start of the session.) 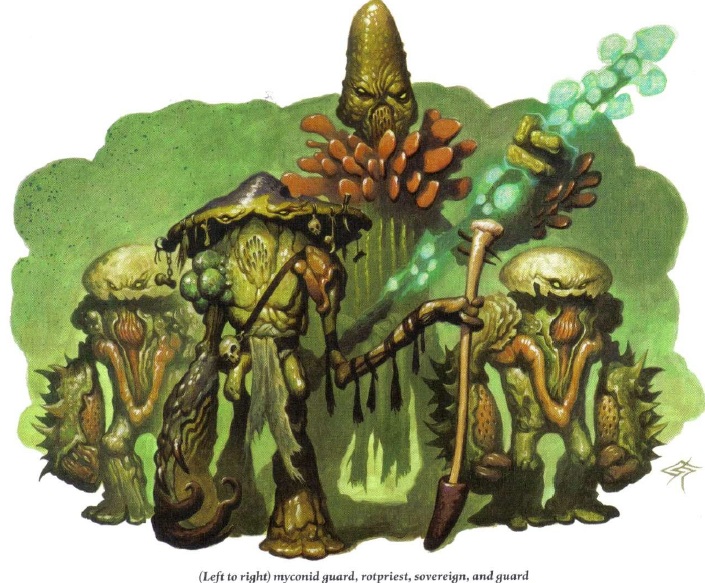 As the party slowly enters the room, several mushroom like figures rise up from where they were resting, disturbed by Xeres’s flight. Forewarned by the knowledge that slimes are often sighted near myconids, they avoid the green slime that falls from the ceiling. 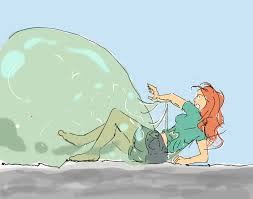 Thorn goes down, but Whyrun sends a majestic word in his direction. Ulvein explodes one of the tables, but two other heroes go down elsewhere. Things look grim for the adventures, but the green slime is finally destroyed. The myconids are all finally destroyed, but at the cost of Thorn, the heroic monk who will never rise again.