The Cast
Brian T as Ardoare the Tiefling Sorcerer.
Lance as Whyrun the Dragonborn Bard.
Jeff as Rhyn the Human Avenger! (Avengers Assemble!)
Collin as Gwenn the Human Paladin.
Scott as Eldritch the Human Warlock not named after the bolt.
Michael as Xian the Drow Archer.
Aurora as Ancana the Dark Elf Witch.
Tim as DM

As the party steps close to the northernmost door, the key they discovered in the Apprentice’s bedchamber resonates with a cheerful hum, and begins to glow warmly. Without being touched, the door slides open with a deep grinding sound.

The chamber within resembles a wizard’s workroom of sorts, albeit thoroughly scoured. Bits of dusty, crinkled paper litter the place, particularly around a shattered table, in the midst of which sparkles something metallic.

The splintered remains of an empty coat rack stand near the door cut in half by a magical blast. Several strange crystal rock formations stand near the end of the room, near a large pit about twenty feet deep.

At the southeastern corner of the room, a short flight of steps lead to a raised platform ten feet in height.

Gwenn steps into the room and moves up to the broken table. Rhyn sends his dog/bear up near Gwenn and tells it to get ready to fight when something attacks. Eldritch moves up near the crystal rock and examines it for magical energies and finds none. Xian and Whyrun also move into the room, exploring for dangers as they move. Ancana sends an eldritch blast at the closest rock formation, shattering a piece of it off and damaging Eldritch in the process. “Hey! Watch it!” yells Eldritch back at Ancana. Ardoare is the last to enter the chamber and she makes her way to the back and up the stairs towards the platform.

Their presences awakens a frenzied buzzing sound, and they see the air rippling as bizarre creatures like something out of a nightmare materialize in the chamber. The creatures are out of phase and seem transparent, perhaps insubstantial. 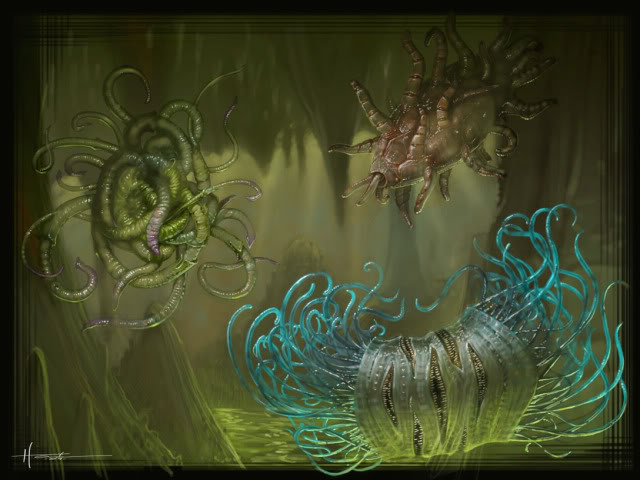 (Fell taints are beautiful, translucent orbs of wispy tendrils that flow and writhe as if in winds that aren’t there. They have a subtle iridescent glossy sheen and are about 2–3 feet in diameter. Adding to their strangeness is the fact that they don’t make any noise. Frequently their victims scream in agony or whimper in despair, but the fell taints themselves are completely silent no matter what they are doing at any given moment. A fell taint’s victim can feel a hit from the fell taint, but the fell taint’s tendrils continue to twist and flow undisturbed.)

The heroes seem to do less damage then they would expect to do when fighting off monsters. Their attacks seem to pass through the bodies. Ancana shoots off another eldritch bolt and watches as it pass through the monster, hit the iron maiden behind the monster, ricochet off, and hit Eldritch. “What? Again?” yells Eldritch as he fends off the Fell Taint Lasher next to him.

As they battle the beautiful, yet deadly monsters, Xian notices a dark figure standing on the platform. It is the dark ghost the saw the in the bed chamber. It doesn’t attack the heroes or seem to be controlling the monsters, but simply observing the battle. After a few minutes it fades away.

The damage the adventures take is not physical, but metal or psychic. Ardoare takes a harsh blow from the Fell Taint Pulsar and she recalls the time when her pet dog ran away and never returned. “Nooo! Fluffy!” she screams. Ancana recalls her first childhood heart break and blasts another bolt of eldritch energy at the Fell Taint Thought Eater. The bolt rips apart the last Fell Taint and partially hits Eldritch who is standing next it. “KNOCK IT OFF!” yells Eldritch as he wipes ectoplasm from his robe.

After defeating the Fell Taints, the party searches the chamber. Gwenn gets trapped in the iron maiden, but finds a secret compartment containing a potion of healing and two moonstones worth 25 gp each. Ancana is attracted to an old broom leaning against the wall in the corner. To everyone else it looks like an old stick, but to Ancana’s trained eye, it is the Staff of the Apprentice.

(New stuff I forgot to read in from the book) As Ancana studies the staff, the purple ghost from the bedchamber appears on the platform and emulates casting attack spells. No actually attack happens, but this continues for a few minutes before the ghost fades. (End new stuff.)

Amongst the scraps of dusty paper the adventures find several pages torn from the Apprentice’s journal. “My thoughts dwell on that poor creature in the hot chamber, caught in my master’s mad schemes to test my resistance to this ‘spellplague’ he’s always mumbling about. I only hope I can one day bring her peace. ~Maer…"

The last four letters appear to be part of a signature, which is mostly obscured, leaving only the beginning visible.

The adventures decide to rest up here in the chamber, but are unsuccessful in their attempt at an extended rest. Their dreams are fretful as the black specter haunt them whenever they try and sleep or rest.